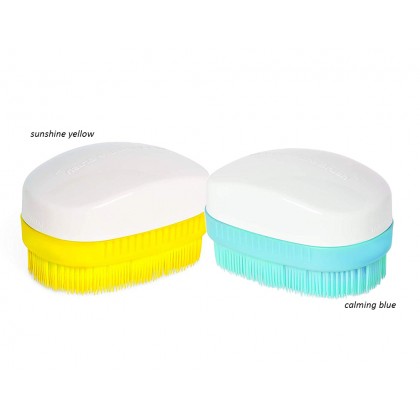 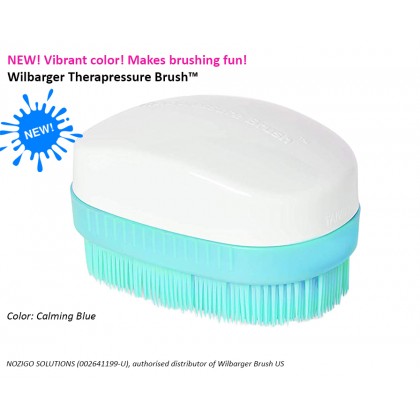 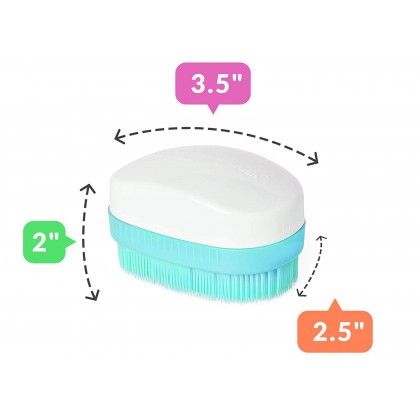 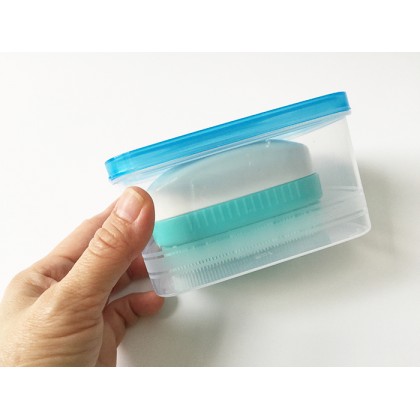 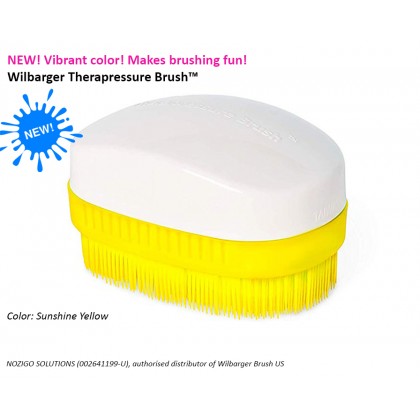 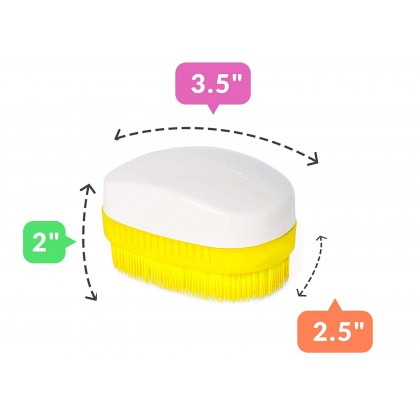 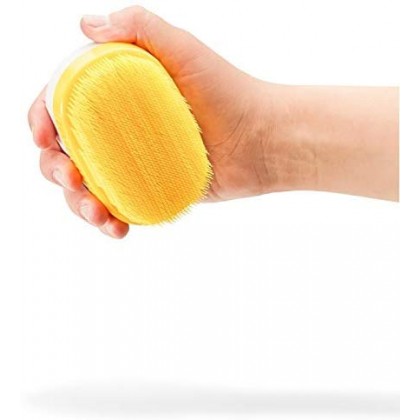 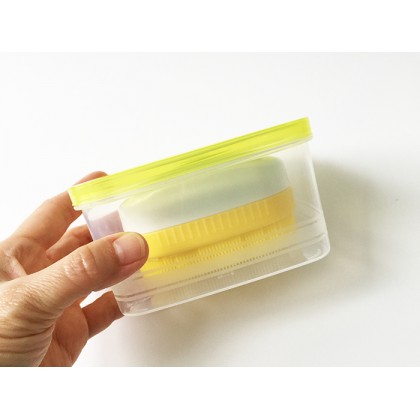 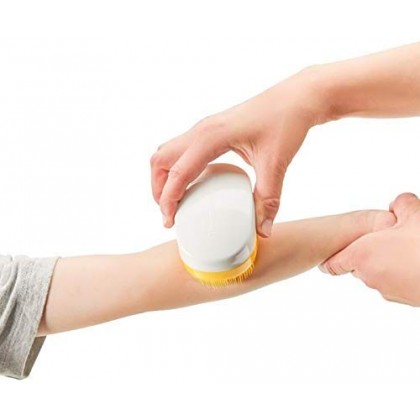 About the product:
~ Sensory brush most recommended for the Wilbarger Protocol Therapy
~ Developed by Patricia Wilbarger, MEd, OTR, FAOTA., this brush has many improvements over the Pressure Brush ("corn brush").
~ Oval in shape, the brush has a greater density of bristles for more consistent treatment. Comes with a comfortable handle
~ Large handle for ease of use
~ Soft, dense bristles that give the perfect amount of sensory input for calming
~ Great for sensory processing disorder or autism spectrum disorder (ASD)

Helping People Sensitive to Touch
The Wilbarger Protocol (also referred to as brushing therapy) is often a part of a sensory integration or sensory therapy program. It involves brushing the body with a small surgical brush throughout the day. People who exhibit symptoms of tactile defensiveness are extremely sensitive to touch. They often fear or resist being touched, have difficulty transitioning between activities, and may be lethargic. This therapy was developed by Patricia Wilbarger, MEd, OTR, FAOTA.

The complete protocol usually takes 2-3 minutes to administer. The first step involves using Therapressure Brush which is run over the child's skin, using very firm pressure; it is like a deep pressure massage. Brushing starts at the arms and works down to the feet.

Important: The face, chest, and stomach area are never brushed because these are very sensitive areas. Brushing these areas may cause adverse reactions including vomiting.

There is not much documented research on the Wilbarger Protocol. However, many parents of children with autism have reported seeing decreases in sensory defensiveness and anxiety as a result of using this technique. Some of the benefits may include improved ability to transition between daily activities, improved attention span, a decreased fear or discomfort of being touched, enhanced coordination, and better self-regulation.

The brushing therapy is initially recommended every 2 hours while the child is awake. Therapists usually re-assess the level of brushing after two weeks. At that time they may modify the program. The brushing continues as long as the individual benefits from it. This program may be a part of sensory integration therapy in which case the child will also be directed to work with a variety of sensory toys and tools.

After the brushing therapy, therapists may also prescribe gentle joint compressions to the shoulders, elbows, wrists, fingers, hips, knees/ankles, and sternum for a count of ten. Self-administration of joint compression by the client can also be done by pushing against walls, doing jumping-jacks, push-ups, or jumping on a trampoline.

Finally, the therapist may also suggest the Oral Tactile Technique, or OTT. This technique requires a finger to swipe along the inside of the person’s mouth. This is helpful for kids with oral defensiveness. (These children may have trouble with foods because of the texture or may hate having their teeth brushed.)

If you think that your child would benefit from the Wilbargar Protocol, it is important to seek guidance from an Occupational Therapist.

The OT must be trained in sensory integration and must be specifically trained to use the Wilbargar Protocol. Performing the therapy in a manner other than taught by a trained professional may not be effective and can be very uncomfortable for the individual.

Some of the benefits of using sensory brushing are that it improves:
~ Focus
~ The ability to handle new situations
~ Self-awareness
~ Self-organization
~ Self-control

It is an over reaction of our normal protective senses. Individuals with sensory defensiveness have their own response style. There may be patterns of avoidance, sensory seeking, fear, anxiety or even aggression.

Social Emotional Disorders Related to Sensory Defensiveness are the pattern of learned behaviors that create habits and interaction styles that are protective and defensive in nature. These stress and anxiety reaction can continue after the primary symptoms of sensory defensiveness are no longer present.

What are the types of Sensory Defensiveness?

Tactile Defensiveness:
This is an overreaction to touch or tactile experiences. This may result in avoiding touch from others, dislike crowds, irritation when having hair washed or cut, avoidance or certain types of clothing, and many other similar reactions.

The behavior patterns observed during somatosensory testing were distinctive and led to many studies in occupational therapy clinical practice that further elaborated this syndrome.

Oral Defensiveness:
This is an avoidance of certain textures of food and irritation with activities using the mouth in general. The patterns of avoidance are unique to each individual.

Some avoid soft, slimy foods, others, avoid rough texture for example. Others will seek out certain sensation in their mouth and may chew or suck on objects.

Gravitational Insecurity:
This appears to be an irrational fear of changes in head position or movement. Individuals are often fearful of having their feet leave the ground, or having their head tipped backward or downward.
They may be fearful of certain movement experiences such as carnival rides, riding a bicycle, walking down stairs or climbing on playground equipment.

Postural Insecurity:
This is a fear and avoidance of certain movement activities because of poor postural control. This may result in fearfulness traversing certain unstable or variable surfaces or resistance to challenging balance.

Proprioceptive Defensiveness:
This is a resistance to input into the joints either by compression or traction.
Some children avoid putting weight on their joints such as when standing, pushing things or jumping. Some complain about lifting heavy things.

Visual Defensiveness:
This appears as an over sensitivity to light, visual distractibility, and/or gaze avoidance.

Auditory Defensiveness:
This is an over-sensitivity to certain sounds. Vacuum cleaners, fire alarms or other noises can trigger an alarm or a defensive response.

When is the best time to use sensory brushing?
Brushing is a good way to establish a sensory diet routine and add to preparatory activity.

For example, if a child has a difficult time tolerating a busy environment like a birthday party or holiday gathering, brushing can be used to ‘prepare’ the child’s nervous system to enter that situation, by aiding regulation.

At bedtime, brushing can be used as part of a wind-down routine to signal the brain and body to get ready to sleep.
A warm cup of milk, a short yoga sequence, brushing and a bedtime story can prepare all the sensory systems for rest.

Another perfect place for brushing is in bonding between parent and child.

Brushing can be similar to infant massage in principle, as it is done with a trusted caregiver and helps target the proprioceptive system and calm the tactile (touch) system.

Brushing should be a desired activity for the child and enjoyed by both participants.